The viral iPhone 7 headphone jack prank video has received over 13.5 million views so far, (with over 159K "likes" and over 94K "dislikes"), and while most viewers took it for what it was - a video prank by someone with more money than common sense - some viewers apparently took it to heart to attempt the modification on their brand new iPhones!

One of the biggest controversies over the design of the new iPhone 7 and iPhone 7 Plus is Apple's decision to remove the device's traditional 3.5 mm headphone jack, in favor of using Bluetooth or Lightning Port-connected headphones.

While Apple includes a new set of Lightning-connected Earbuds and a headphone to Lightning adapter in the box with the new iPhone, this hasn't eased the pain of many iPhone users. So when a video, (shown above), appeared on the internet soon after the release of the iPhone, allegedly demonstrating a "secret hack" to restore iPhone 7 headphone jack, many people were apparently intrigued by the idea. This led to sorrow for some.

The video shows Youtuber, TechRax, drilling a 3.5mm hole into an iPhone 7 with a power drill while holding the iPhone 7 in a vice. The hole is drilled into the ornamental speaker grille located in the same spot where the headphone jack resided in previous iPhones.
TechRax claims that drilling into the hole will uncover a hidden socket. After making the hole, he's shown plugging a 3.5mm headphone into the newly created "socket," and music is played. (It should be noted the music’s sound is coming out of the internal speaker of the iPhone 7, and not the headphones).

The Guardian reports the video was created by Ukrainian YouTuber Taras Maksimuk a.k.a. TechRax, whose profile says the he  “specializes in smashing technology since 2011.” Some of Maksimuk’s other video masterpieces include his microwaving an iPhone, and dunking another iPhone in liquid nitrogen for five minutes.

Maksimuk is not the first to fool gullible viewers into destroying their iPhones. In 2013, jokesters managed to convince some iPhone owners that the iOS 7 update somehow made their handsets waterproof. More recently, some iPhone 6 users were convinced microwaving their devices would wirelessly quick-charge the battery. (P.S. It didn't.) 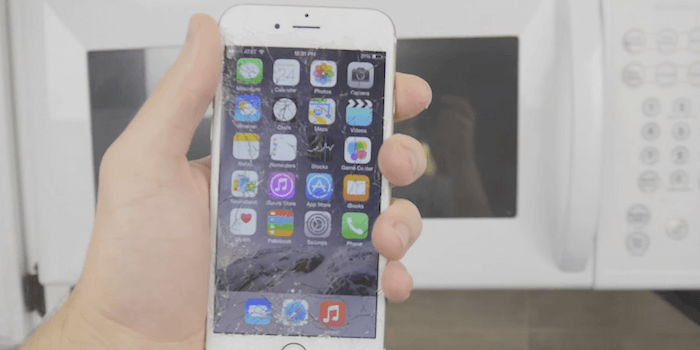 The comments section on the video shows some viewers were inspired to try it, with less than satisfactory results.

SwagishSwedishPony: I don’t know why but it do not work, when i try to play music in it it plays out of speakers not from headphones, i think this guy is a big liar and made us all look stupid

Maksimuk confirmed via Twitter that people were complaining about the "hack.":

Legit people complaining to me about them drilling the iPhone 7 for a headphone jack.
😐😐😂

Hopefully, this article hasn't inspired you to try drilling into your new iPhone 7. There is no hidden headphone jack that can be restored. None, nil, nada, zero. (Is this getting through yet?)

Making radical modifications to an iPhone 7 or iPhone 7 Plus is definitely not covered by either Apple's standard warranty, or by AppleCare+, for that matter. Not even in many European countries where Apple is required to provide enhanced warranty coverage. (Trust us, we checked.)

Drilling a hole in your new device will only lead to heartache, a damaged case at the very least, or at worse a destroyed, worthless device.

Did you or someone you know try this viral iPhone 7 headphone jack prank?  If so, tell me about it in the comments below.